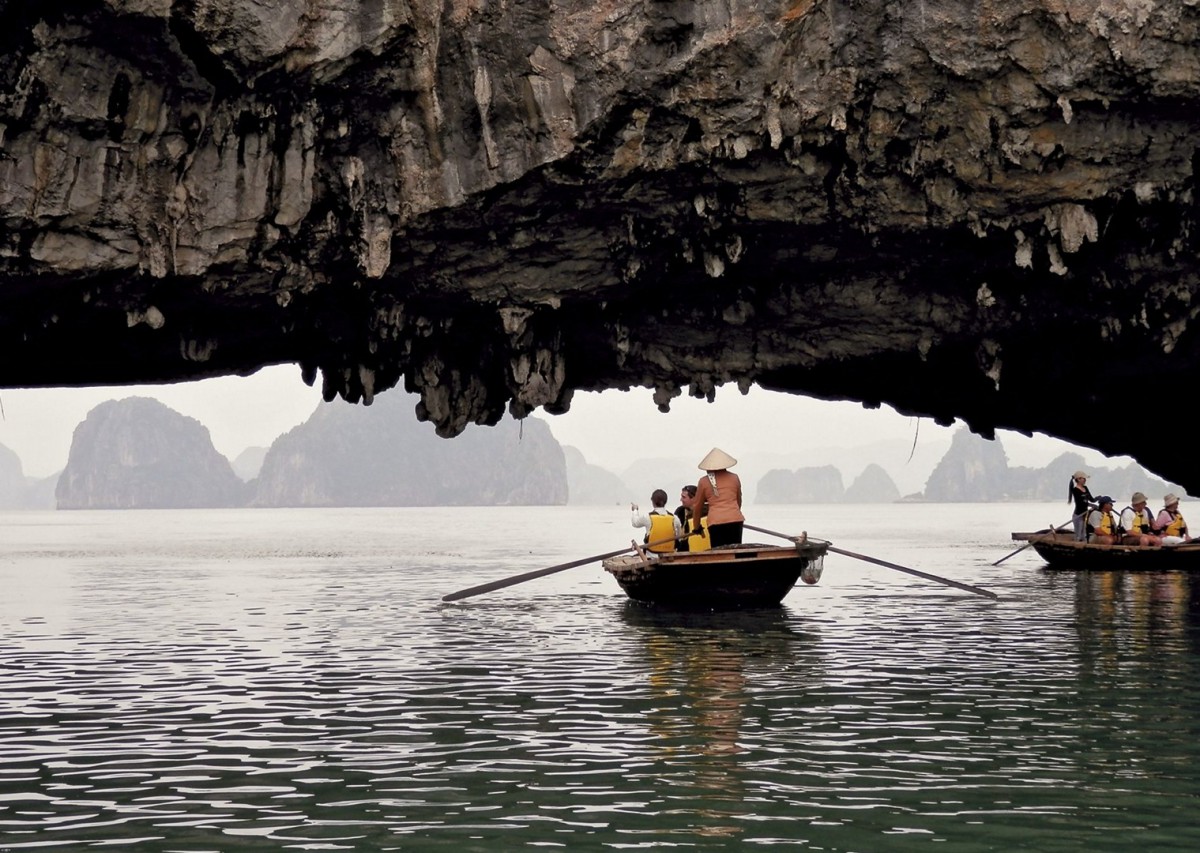 Gateway World Shop’s Manager, and member of the BAFTS’ Board, Hazel Dobson, signed up for a Traidcraft Meet the People Tour to Vietnam last Autumn. She had previously visited Peru and Kathmandu on producer trips and thought her gallivanting days were over! She opted for Vietnam as it was a challenge for her to find out about a country which she had only ever associated with a horrific war in the 1960s, when she was a teenager. It was somewhere she would otherwise never had thought of visiting.

The visit was almost three weeks in total, with internal flights, two long road journeys, and two by river. The tour covered almost the entire country in that space of time (the bright orange country on the map). Vietnam is a long thin country with its Eastern coast bordering what the Vietnamese call the Indo-China Sea. It was a French colony from the middle of the 1800s and the people suffered a lot under the French. Vietnam is now a Communist Country -this was the reason for the Americans entering the war in the 1960s. Hazel was rarely aware of this fact on her visit, as visitors are very well catered for. Half the current population of 90 million is under the age of 25. Vietnam aspires to be a first-world country, and has good trade relations with Australia, but Russia is never mentioned. It seems to have a mixture of Hinduism, Buddhism, and veneration of dead relatives as its main religions.

Her tour embraced many stops, including Hanoi (North), the capital City, Hoi An (about halfway down the country) and Saigon (in the South). Vietnam was very green and agriculture appeared good, with an abundance of fish and prawns. Livestock at local markets was still “on the hoof” alongside a never-ending array of noodles! In terms of suppliers, the visitors went to see “Craft Link“, one of Traidcraft‘s suppliers, with over 40 artisan groups and around 5,000 artisans in the North of Vietnam. They work with many minority groups, (about 12% of the population) and a few traditional tribes who have been left behind as the economy improved. Typical crafts include lacquer works involving crushed egg shells, from designs created from the artisans’ own imagination or memory, or carving mother-of-pearl shells for the inlay.  This long process is repeated many times, dipped in lacquer, dried then rubbed smooth.

Some entire villages make furniture from bamboo, and smoke the wood first to harden it. Craft Link supports this industry by giving training in marketing their products, which are for local markets, not for export. There were also visits to a social enterprise in the city of Hue, in which Traidcraft has had some input. It provides work opportunities for disabled and disadvantaged young people. One particular project stood out in Hoi, a fair trade project called “Reaching Out” for severely disabled young adults, many of whom were deaf-mute, and a silent tea room. This project has concentrated on marketing themselves locally and with great success. They produce bedding, tableware, woven and metal goods and more.

The tour included Mai Handicrafts, a Traidcraft supplier, and visiting some crocheting projects, in Central and Southern Vietnam. They saw workers packaging items and doing quality checks at Mai Handicrafts, as well as creating recycled paper products, although there was some doubt as to whether this project would be sustainable in the long-term.  All in all, there were some excellent social enterprises and fair trade businesses doing their best to keep traditional skills alive and work with some of the most vulnerable and marginalised members of their society.

Our next tour to Vietnam will be departing next November. Click here for more details or contact us in the office for more information and to check availability. You can call Hannah on 0191 2651110 or email us at info@skedaddle.com 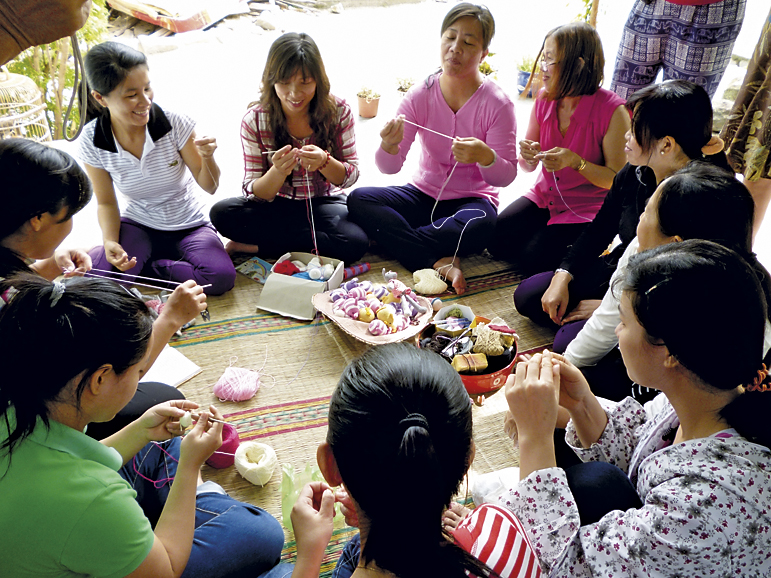 Our tour in Vietnam is packed full of character and charm, so it’s great to see this tour featured  in a double page spread in The Guardian, thanks to journalist Liz Boulter. Didn’t manage to grab yourself a copy? Here’s a preview below… 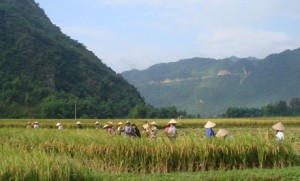 It started with a tiny ceramic teapot and that led to a lacquered bamboo dish in a bright abstract pattern, then a hand-woven scarf. It was just the start of my tour of Vietnam, and I was already hooked.

I am not usually a shopaholic, but here not only did the prices appeal to my Yorkshire sensibilities – none of the above items cost more than £2 – but I could convince myself that this retail therapy was doing some good. There’s all sorts of tat on sale to tourists in Vietnam, much of it made in China. But I knew my spending would make a difference to local lives because I was on holiday with an organisation which makes that its mission.

Traidcraft, the people behind the British catalogues and gift shops, has teamed up with cycling-holiday operator Saddle Skedaddle (one of its founders used to work for Traidcraft) to offer trips to the developing countries the charity sources its wares from. The idea of Traidcraft’s “Meet the People” holidays (there’s no cycling on this particular trip) was to give people who were already part of the fair-trade movement – volunteering in shops, running stalls – the chance to see where products originated.

Even for those who’ve never been near a fairly traded fruit bowl, the tours offer a unique perspective, on people and cultures as well as sightseeing. (They also run trips in other Asian countries, and in Africa and Latin America.) Plus you get to shop till you drop, and feel good about it.

My teapot and dish came from a showroom in Hanoi run by Craft Link, a non-profit organisation that works with 60 artisan groups in northern Vietnam. Over tea and little cakes upstairs, we heard from manager Ms Tran and younger Ms Thuy all about its work finding markets for handicrafts as a way of keeping traditions alive and alleviating poverty. It’s not charity: they help groups for a couple of years, with training and financial support. And they always work with women.

Then we were let loose in the shop: our group of 15 Brits snapped up silk purses and scarves, bags, ceramics and jewellery. There was still more than two weeks of the tour left, but hey, a gorgeous little brooch won’t take up much room…

Want to find out more? Click here to read Liz’s article in full. 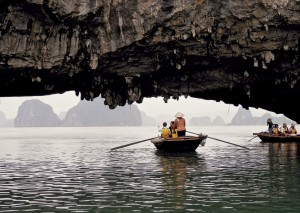